The huge storm front that wreaked havoc among the RC at Sail Melbourne. Photo by Hartas Productions

Another day of strong winds for the final day of Sail Melbourne International (29 November to 3 December 2017) meant an early finish to the event with the last day of Invited class racing called off. Olympic classes also finished one day early and wrapped up on Saturday, 2 December with medal winners decided after a three-day race series (29 Nov to 1 December 2017).

“This has been a very unusual weather pattern and we had 20 to 25 knots all night. The forecast is that it will stay like that all day as well. Even if some of the classes could cope with that wind speed, what they could not cope with is the sea state we have out there. In the channel we have two to three metre waves,” Principal Race Officer (PRO) Mark Taylor explained the situation.

It was a challenging week for the race committee with a heavy weather front crossing Melbourne and Victoria, but with the Organising Committee’s world class expertise the event wrapped up smoothly. “We have a good group of partner clubs that allow us to deliver the number of courses that we have and we have got great depth in race management skills, partially because of this event. Sail Melbourne has allowed us to put world’s best practice back to our partner clubs and to also use the Sailing World Cup we hosted over the last few years to lift a lot of skills here.” Mark Taylor said with Sail Melbourne International one of the fixtures on the World Sailing calendar.

“It is a shame that the weather hasn’t been kind to us but it’s been wonderful to have had such a good turn out at our event,” Event Chairman Mark Klemens agreed. “This regatta has been going since 1992 and was coupled with the Sailing World Cup for the last few years and has continued on. Our host Royal Brighton Yacht Club has been amazing and we had a fantastic group of volunteers, who we could not have done without. It’s one of the events, which is on the sailing calendar in Australia and around the world and I’m confident it will only grow stronger in the future. In regard to the weather, I’m sure weather like this weekend will never happen again,” Klemens added laughing. 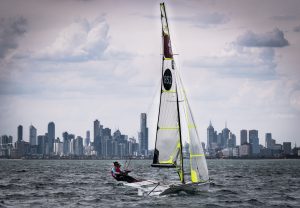 Sail Melbourne International sailing regatta saw many competitors from around the world compete against the Melbourne skyline. Photo by Hartas Productions

Sail Melbourne International is Australia’s premier Olympic and Invited Classes Regatta, held annually in the waters of Port Phillip. This year the regatta was hosted by Royal Brighton Yacht Club with some of the world’s best sailors from Australia and around the world attending.

Sail Melbourne International offers the rare opportunity for competitors to mix it up with Australia’s up and coming talent, world champions and Olympic medallists on the Port Phillip racetrack. Competing along side their Olympic heroes offers an aspirational pathway for young sailors in the Invited and Youth classes, which wrapped up on Sunday, 3 December.

With only one day of racing under the belt, it came down to a discretionary decision from race management to award medals to the Invited classes with results standing from Friday, 1 December 2017.

Local Victorian and parasailing athlete Neil Patterson, who is aiming for the Parasailing World Championships in the USA in September next year, had two bullets and a third in the International 2.4m class to take out his first win in this class at his home club.

“It was the shortest regatta I’ve ever done with only three races and I was hoping we would get some races in today, but unfortunately the weather has been pretty bad. You get that and it’s all part of the sport,” Neil Patterson said. “The three races we had were great though and it was awesome to have a competitive 2.4m fleet here. It was good training for me before I head over to Europe for more racing.”

Youth sailing classes made up the majority of the Invited classes and included the Australian Sailing Youth Team, who used Sail Melbourne International 2017 as their final hit-out ahead of the 2017 Youth Sailing World Championships to take place in Sanya, China from 9 to 16 December 2017.

In the International 420 Youth class Western Australians Marcello Torre (WA) and Owen Ready (WA) won ahead of Australian Sailing Youth Team’s Rome Featherstone and Otto Henry after the fleet only got two races in.

“We were trying to stay consistent especially with those tricky conditions out there and all in all we are pretty happy with how it all went,” Otto Henry (NSW) said.

“We had few good races and the event was good for our confidence going into the Youth Worlds next wee. We’ve had some up and down training this year with some sickness and school requirements so sailing here was a bit of a confidence boost. We are very excited and leave Tuesday for the World Champs so it’s getting really close and really exciting,” Eleanor Grimshaw said.

“Sail Melbourne was still a good event even though it got too windy and we couldn’t go out. It was especially a good lead up for the youth team and for my training partner Caelin Winchcombe, who is heading to Youth Worlds next week. It was good competitive racing for the three races we had,” Zac Little wood said.

Two races were completed in the Open Bic with Queenslander Travis Adley winning the event on equal points with Victorian Hamish Cowell after both posted a first and second place on Friday. Third place went to Ben Hodder (VIC).

The Optimist Open had three races with Fletcher Walters (NSW) finishing on top of the fleet with Queenslander Blake Wilson following in second. Quinn Auricht placed third, while Bridget Conrad (NSW) won the girls category in the mixed fleet.

Sail Melbourne International is run by an international race committee, which relies on the support and experience of its volunteer team. The Kevin Wood Award, named after the event chairman and driving force when it started, recognises the outstanding contribution to the event by those behind the scenes with this year’s award going to Ross and Kevin Wilson.

Brothers Ross and Kevin Wilson were recognised for their 25 years commitment to the event and the race officials with Olympic Games experience have been instrumental in promoting Sail Melbourne around the world.

“Ross and Kevin ARE Sail Melbourne and to many they are the face of Sail Melbourne. They have been integral from the start and have ensured that the one thing that has remained consistent over the 25 years is top level race management, the envy of the world,” Event Chairman Mark Klemens said in his closing words of the regatta after the Invited Class medal presentations.

Kick-start your week with this awesome EVENT WRAP VIDEO with all the BEST bits from the 2017 edition of SAIL MELBOURNE thanks to Hartas Productions!Great to see you all in Melbourne and at Royal Brighton Yacht Club & we're looking forward to seeing you all back here in 2018. Find all our Highlight videos here: http://bit.ly/2017SailMelb_HighlightsPlaylistAustralian Sailing | Australian Sailing Team | Australian Sailing – Victoria | Visit Melbourne | Finn Class | 470 Olympic Sailing | World Sailing