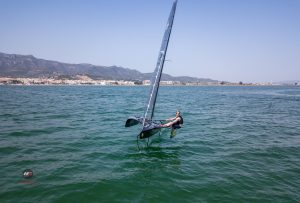 In April 2018, Hartas Productions headed to Sant Carles de la Ràpita, Spain to shoot a promotional film for the brand new Flying Mantis boat. As a sailor and as a film maker, this was a very exciting opportunity. Providing event coverage only allows for a limited amount of creativity but Simon and Amanda from Flying Mantis afforded full creative reign for this project to Hartas Productions.

After a few months of brainstorming and storyboarding, the shoot began in earnest and featured smoke bombs, drones, an over night shoot in the customs warehouse etc. It was all very exciting to shoot and the boat certainly provided the interesting subject for the film. What a boat!

Foiling is here to stay. Developments in The America’s Cup and proposals for foiling boats in the Olympics are trickling down to the sailing public. Foiling has been around for years but until now it helped to be an expert sailor and not too large if you wanted to succeed. The Flying Mantis is designed to be sailed with a conventional daggerboard that can be swapped for a central T-foil, to go foiling. Why not progress from one to the other?

The central hull weighs around 25kg plus outriggers at 12.5kg each. The Flying Mantis is designed to be rigged quickly. The outriggers can be fitted or de-rigged without taking down the mast. It doesn’t need to live in a dinghy park, which makes it easier to sail somewhere different each day. 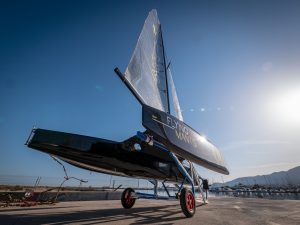 A great boat that any sailor can enjoy. It comes with a lift-up rudder and a central daggerboard.This boat has all the advantages of lightweight carbon hulls, mast and boom that result in high performance and forgiving multihull sailing.

Everything from the daggerboard sailing (DBS) version plus additional central and rudder T-foils, a conversion insert for the daggerboard case and a foiling system to connect a control wand to the front of the bowsprit. It is all designed to provide early take-off at lower boat speeds enabling more fun in lighter winds.

If the sailing conditions are not great for foiling, it’s easy to convert back to daggerboard sailing.

The 3 hulls are quick and easy to assemble, and are extremely light so less power is needed to drive the Flying Mantis forward. A relatively flat underside minimises time in the water, generating hydrodynamic lift. The U-shaped hull maximises displacement as the boat drops off the foils. The hulls are an epoxy sandwich carbon construction with a painted and lacquered finish that weighs less than the usual gel coat. Hull colour is customisable. The high performance, lightweight construction of the Flying Mantis means that this boat should not be run up onto or dragged along a beach.The central and rudder T-foils can be lifted to help launch/recover from a beach. The control wand is attached to the end of a bowsprit, well forward of the central foil and close to the water. Being forward enables control of the pitch and ride height, and eliminates flow distortion from the central foil.

The central and rudder T-foils can be lifted to help launch/recover from a beach. The control wand is attached to the end of a bowsprit, well forward of the central foil and close to the water. Being forward enables control of the pitch and ride height, and eliminates flow distortion from the central foil. The twist-grip tiller controls the angle of the rudder T-foil, giving positive lift upwind and negative lift downwind, (less chance of pitch-poling).

The rigging is designed to be set-up and dismantled as quickly as possible. For example, the trampolines are partly secured using velcro fixings which are simple but effective. The idea of simplicity extends to the layout of the sheets and lines, and the use of a Gnav instead of a kicker/vang, helping to keep the deck clear.

Overall, we are super thrilled to have had this opportunity to flex our creative muscles and we are all very pleased with the result. Simon, Amanda and the whole crew from the shoot were fantastic to work with. If you have a team or boat that wants a cool, edgy promotional film, we would love to get involved! Please do not hesitate to contact Hartas Productions!

Posted by Hartas Productions on Wednesday, 9 May 2018