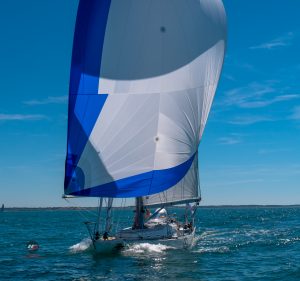 Golden Globe Race competitor Tapio Lehtinen cruises past as he prepares to sail around the world non-stop, singlehanded and unassisted! Photo by Hartas Productions

The Golden Globe Race is an amazing yacht racing event. Sailors from around the world have decided to set out on this amazing journey to sail their boats solo, non-stop and unassisted all the way around the globe!

Meet Tapio Lehtinen, a 6m sailor from Finland, who is taking part in this historic race! Tapio has competed in some off shore sailing but not recently. His biggest achievement was as watch captain in the 1981-82 Whitbred Round the World Race. He has spent a long time inspecting the rules governing which yachts are permitted and he chose his yacht very carefully and there are rumours aplenty that his yacht should be the fastest one in the fleet! 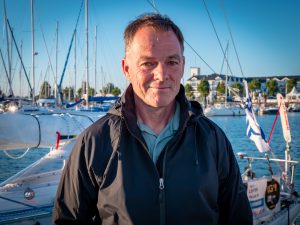 Tapio Lehtinen – Getting ready to sail around the world solo, non-stop and unassisted

The race came about from following Sir Francis Chichester’s example of sailing around the world solo, following the route of the clipper ships and the great grain race. Sir Robin Knox-Johnston was the first person to complete the circumnavigation alone, non-stop and unassisted. As well as winning, he was the only one of the 9 competitors to finish the race.

Originally and at heart, the Golden Globe Race is an amateur event, and the 2018 edition is following the original design very closely, with competitors only allowed to use yachts and equipment similar to those used in the original race. With regards to safety equipment, that has been updated and is very modern, but almost everything else is 1960’s technology!

This race and voyage is notorious for testing sailors, with the first edition resulting in a suicide and other mysterious deaths. The solitude, cramped living quarters and extreme weather conditions test the mental aptitude of everyone who attempts this feat. When asked about the mental challenges, Tapio said ‘I am a simple man with strong foundation in logic. I think that one of the biggest challenges will actually be boredom and struggling to remain focused.’ 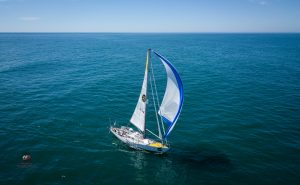 Tapio is sailing his yacht, Asteria, in the Golden Globe Race, and has been out training and making sure all systems are working properly before embarking on this great voyage

On the race as a whole, he went on to say, ‘The biggest challenge is getting to the finish line. The old saying goes that to finish first, first you have to finish and that is probably most true in this case. So I have gone to great lengths to fully refit out my yacht Asteria and strengthen her greatly around critical areas such as the mast,

‘It was a difficult trade off though, because we can strengthen the boat too much, and end up with a very heavy and slow boat, which is no good because this is, after all, a race. So my first priority was to ensure that I make it to the finish line safely and in one piece, but that is closely followed by a desire to be competitive and win the race overall,’

This race is truly one of the last great adventures left on the planet, and with so many competitors from so many different countries, it is great to see that the sport of sailing and yachting still captures the imagination of some of the most adventurous spirits out there. Hartas Productions wishes all competitors the very best of luck and we encourage viewers to follow the racing and support the sailors on their huge journey!

Sailing alone around the world without stopping sounds amazing, because it is. Watch Tapio Lehtinen explain his campaign for the 2018 Golden Globe Race! #GGR2018