Hartas Productions worked to create one of the coolest sailing videos ever to promote the BlueWorks ONE main foil for the foiling Moth. Watch the video here!

The foiling Moth class is one of the most innovative and technical classes on the water, and BlueWorks is the latest company to enter the market offering the newest high-performance parts for the Moth; The BlueWorks ONE hydrofoil.

The guys at BlueWorks have spent years designing and refining their new main hydrofoil for the foiling Moth class. It is truly a huge step forward in terms of design and quality.

The BlueWorks ONE foil is anhedral, i.e. both sides of the wing are swept down. This feature was hard to achieve from a manufacturing- and flap-movement point of view, but after a few innovations and significant amounts of testing, the result is a higher performance foil.

The anhedral foil reduces the total wetted surface area of the foils by several percent as the vertical foil does not need to be as deep in the water as on straight foils. The anhedral feature also reduces the risk of piercing the surface as often as a straight horizontal foil. That being said, the BlueWorks ONE does not loose control even if it were to pierce the water surface. 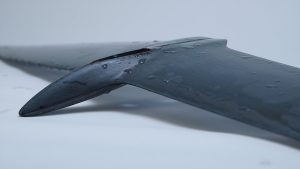 The BlueWorks ONE main foil for the foiling Moth class. Hartas Productions produced an epic promotional sailing video for this awesome foil!

The foil has two flaps joined at the centre line. Together with a continuous top surface and a higher aspect ratio the foil is superior in performance. The BlueWorks ONE also makes manoeuvres in the foiling Moth much easier due to a glider like behaviour.

BlueWorks are proud to have achieved the smoothest production foil seen to date. The BlueWorks ONE has no steps, or discontinuities.​

The top surface is 100% continuous without any compromises in the movement or range of the flap. The advantages of the smooth top surface is obvious.
The ONE is manufactured in one shot, meaning that there is no step, no sikaflex, no post-processing, no gluing or aligning of the flap with respect to the front element. In the case of a discontinuous top surface (currently, all other foils in the market) the flow will find a hurdle at the hinge, therefore adding drag and separating easier. The bottom surface of the flap slides smoothly into the lower skin of the front element leaving a seam that is almost not discernible.

sting foils and identified performance compromises. One issue affecting the performance is that the desired section is either not achieved by the manufacturer or modified while fairing and sanding the hydrofoil. The surface of our mould is high end finish and fairing is not necessary. We therefore guarantee that the section that we designed is kept true all the way to the race course.

Whilst on the island of Martinique in the Caribbean, we conducted a film shoot with the simple aim of capturing everyone’s attention. Nobody in the foiling Moth class had seen a foil like the BlueWorks One before, so at Hartas Productions, we wanted to create the kind of content that noone had ever seen before either. This meant some highly complicated and elaborate shoots, including a dangerous, underwater session with the foiling Moth sailing past within 20cm of the head of our film maker Oliver Hartas!

After heaps of effort and attention to detail, Hartas Productions are proud of the result and BlueWorks are over the moon as well. Check it out for yourself below:

The BlueWorks ONE Hydrofoil