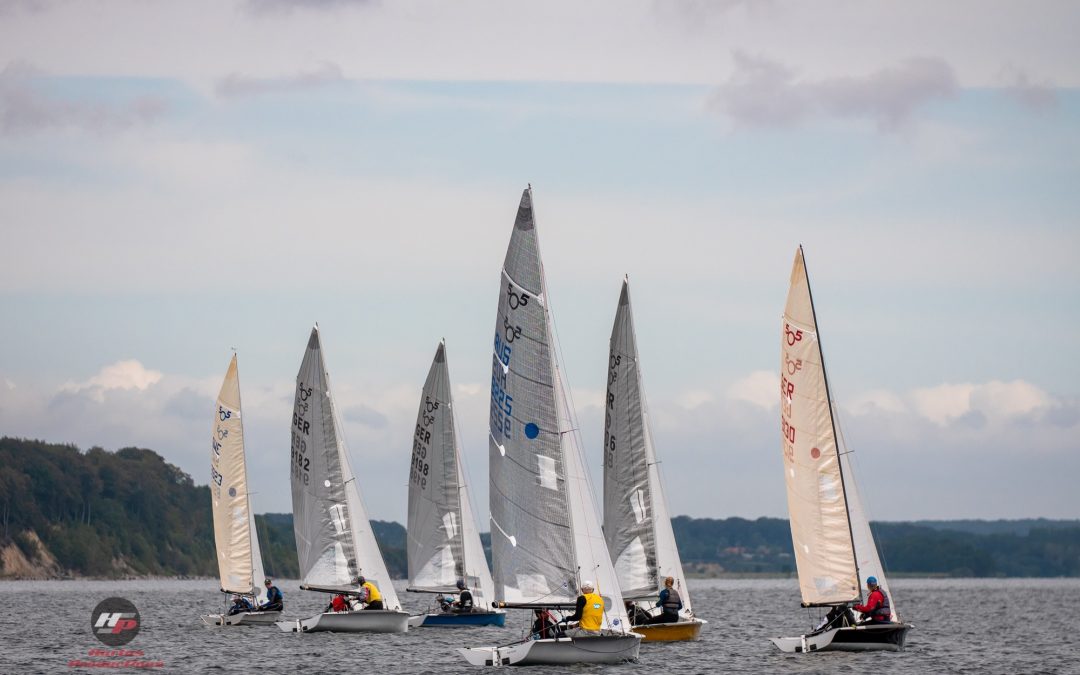 The 2019 International 505 European Championship 06/08/19-10/08/19 was a truly exciting 4-day race, it was as intense as it was unpredictable, with some real weather highs and lows, and some incredible talent showcased from previous World Champions.

The International 505 Class is a very popular international class and is raced actively in 18 countries around the world, the largest in Germany, the US, UK and Australia. It is made unique by its high performance, single design two-person monohull planing dinghy, they are particularly technical to operate and make for fascinating racing. The 505 Class uses its own way of starting races, known as the ‘Rabbit Start’ where you will see the competitor in 10th position sail off port-tack followed by a ‘RIB’ (Committee Boat) upwind for three minutes. Behind the RIB other competitors start out starboard, and if they do not pass in the three minutes they circle down and around the RIB. This system was developed to avoid the recalls often involved in gate-starts and is another feature that makes the 505 Class unique in technique and style.

The first of the four days saw all 3 races take place on time and in medium wind, mostly the conditions were great – with a few showers. It proved a great first day of racing, spirits were high, and everybody was excited to see what the following days would hold.

The second day, although windier ran both of the scheduled races to time, and all of the competitors were incredibly close, as the sailors navigated some big waves.

The third day was the first of the event where the low winds meant the first race start time was delayed by two hours, and that first race when it did run- was a little light, proving difficult for even the most experienced. The westerly breeze died to be replaced by a south easterly wind in the afternoon. For the remainder of the day and the following two races however it really picked up well and ended that third day with great racing conditions and positions so close that there was everything to race for.

The final day everybody arrived at the water grateful for a good 20knot breeze and some good looking waves. At this point there was really no telling who would finish where, the positions were impossibly close due to the wind being so shifty for the entirety of the regatta. All of the sailors- the least to the most experienced and even the previous World Champions were pushed to the best of their technical ability to sail tactically. So tight was the competition that the team who won overall, didn’t actually get a win until their final race, the win was due to their incredibly consistent skill throughout. Conversely, multiple time 505 World Champion Wolfgang Hunger was in a position to fin the overall regatta for quite some time, but didn’t sail the upwind around the end of the final race as well as GBR winners Roger Gilbert and Ben McGrane and so finished in 4th in a twist typical of the unpredictable and tight 505 Class.

Overall it was great to see boats from many nationalities, including the Australian team, and the fantastic event put on by Sønderborg Yacht Club was appreciated by all.

This was a fantastic event to cover, and all four days held fantastic opportunities for great images and footage. It was a very challenging place to film due to the unstable waves, unpredictable wind and stop-start rain, but as always, the end result is some incredible timeless images and footage capturing some truly breathtaking sailing.