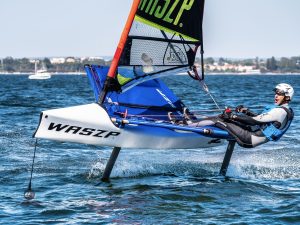 Everyone had a smile on their face at the 2019 WASZP Games! Photo by Hartas Productions

The 2019 WASZP Games was easily one of the best regattas ever. Held in late January 2019 from Royal Freshwater Bay Yacht Club in Perth, Western Australia, all aspects of the event were amazingly organised, flawlessly executed and the racing was exciting and intense every single day!

Hartas Productions is proud to have been affiliated with the WASZP Class since the very first WASZP Games in 2017, and we have provided coverage for many WASZP events since then. However, the 2019 WASZP Games was one of those rare regattas where all the promises made in the lead up to the event were not only fulfilled, but exceeded. The sun was shining, the wind was blowing, and the spirit and culture of the WASZP class was stronger and more cohesive than ever.

At the beginning of the event, the WASZP Slalom Race was held right in front of the clubhouse at Royal Freshwater Bay Yacht Club, and we provided a full blown multi-stream live production with multiple drones, live replays, on-screen graphics and commentary for this incredible day of racing. 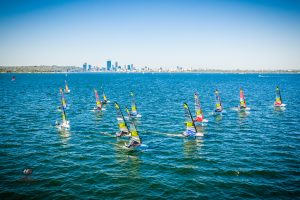 The Perth skyline provided a stunning backdrop to the epic racing at the 2019 WASZP Games. Photo by Hartas Productions

The 2019 WASZP Games ran over Australia Day, which was designated as a rest day and it was a real treat, with Royal Freshwater Bay Yacht Club providing a party yacht for the WASZP fleet to enjoy a raft up in Rocky Bay, a Perth tradition. The culture in this fleet is amazing and the tight knit community is one that is quite unbelievable given the fleet is only 2 years old!

The overall racing that followed was intense and exciting, and unlike too many other regattas recently, the final results of the regatta weren’t decided until the boats crossed the finish line of the final race. Find out more about just how exciting this final day was by reading the report below:

The day that promised so much delivered like few events have done before them. With only 3 points separating Rory Hunter and Tom Trotman heading into the final race the atmosphere around the boat park was amazing as the whole fleet waited for the ever reliable Fremantle Doctor to come in.

After a postponement period of around an hour the fleet finally got away in about 12-14knots from the SW. With the starts proving so crucially important across the event the large spectator contingent had all eyes on where the contenders were starting. At the gun Trotman had a belter of a start with Hunter about 4th row and was then interfered with by a powerboat, it was an intense time however thankfully for Hunter the race was to be restarted due to a general recall. 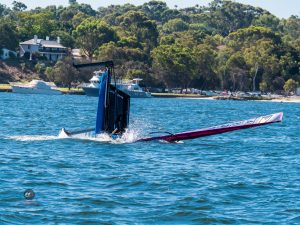 The second start was under a black flag however and a similar start occurred with Trotman powering off the middle of the line, he was high and it was ballsy, however he put the foot down and was going for it, Hunter was slightly more conservative and a little further back off the line not wanting to blow the entire regatta on the final start. As they worked upwind Hunter was hanging on to Trotman with a piece of string and not letting him out of his sight. This allowed New Zealander Bruce Curson through to the lead, this was a big story in itself as he was in a battle to get on the podium and looking to displace Alexander Hoghiem from Norway. Tristan Brown and Brad Devine were also having great races in 2nd and 5th only to discover they had been black flagged at the start, this would prove extremely important as the boats turned downwind for the final time with Trotman holding a slender lead over Hunter and Hogheim was back in 7th.

The breeze was incredibly patchy down the final run and with Trotman splitting away from Hunter on the final run it looked as if the Aussie and a bunch of boats to the right were going to sail in front of Hunter anything could happen at this stage. Bruce Curson took the race win in emphatic fashion and turned his eyes to the action behind him, Pierre Leboucher enjoying the lighter conditions managed to slip inside Trotman pushing him back to 3rd and losing a valuable point on Hunter. There were then 3 boats out to the right who looked to be in puff although Hunter managed to sneak through by a matter of 10 seconds with a nervous gybe at the death.

This meant the 2019 WASZP Games podium was finally sealed with Hunter finishing on 30pts, Trotman on 32pts and Alexander Hogheim just pipping Bruce Curson by 1pt for 3rd place.

With 7 nations in the top 10 it was a truly special International event, in the other divisions Brad Devine claimed the masters trophy, son Tommy Devine took out the 6.9m rig, Elise Beavis is the number 1 female WASZP sailor in the world and Rory Hunter capped off an amazing event taking the U21 title as well!

As well as the successful live video coverage of the hugely popular Slalom event, Hartas Productions also provided daily video highlights of the 2019 WASZP Games, which you can view below. Beneath the videos you can find the overall results of the regatta.

Many regattas make big promises, but the 2019 WASZP Games exceeded everyones expectations! Drama, crashing, laughter, and an overall winner that wasn't decided until today! This regatta is one for the history books!Congratulations to Rory Hunter, Buck Hunter and Alexander Dahl Høgheim on making our podium and well done to all the competitors who came and took part!Thanks to Royal Freshwater Bay Yacht Club and all the volunteers and support staff as wellVideo by Hartas Productions