Sailing With Wings – A mini-documentary by Oliver Hartas – VIDEO 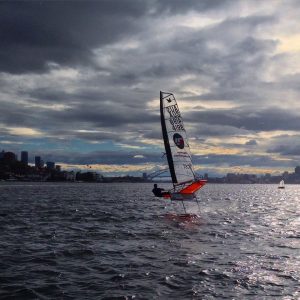 Sailing With Wings – A mini-documentary by Oliver Hartas

Starting out as an idea in 2011, Sailing With Wings was the first foray into short films for Hartas Productions, eventually being released in June of 2015 and winning an IMPACT Docs award for Documentary Short (Student) later that year.

A competitive skiff and multi-hull sailor himself, Oliver Hartas was fed up with the non-sailing community not taking the sport seriously, dismissing it as the pursuit of wealthy retirees. Equipped with the tenacity all competitors have, Oliver set out the planning process to produce a short film that would change the public view on the sport of sailing.

After two years of planning, Hartas Productions teamed up with rising sailing star Scott Cotton and sponsored his brand new Moth, aptly named Usain Boat. Hartas Productions went with Scott down to the 2015 Moth World Championships in Sorrento and filmed the regatta, gathering footage and work-shopping shots together. Three months of preparation went into creating the story line, shot list and script. Hartas Productions set up a GoFundMe crowd-funding account and this brought the total budget up to $3,000!

The filming took place over a couple of weeks in various locations, with much help from the small crew and many supporters and well-wishers along the way. The film was submitted as the final project for Oliver’s Media Arts and Production degree at the University of Technology Sydney, premiering in June of 2015, scoring full marks before winning the IMPACT Docs Award.

Special light animation techniques were innovated during this shoot to create some amazing effects in the ‘Reveal Scene’. In addition, the services of AirView Media were kindly donated for an afternoon of aerial shooting from one of their drones. This footage produced some incredible shots which may possibly be the first ever drone footage of the foiling Moth.

All in all this short film achieved what it set out to do, however, in making it, Hartas Productions came to the conclusion that to properly illuminate the issue and address it, a full length documentary would need to be achieved. If you would like to see such a documentary, please contact us!

In addition, because this film was such a major undertaking, we also had a ‘Behind The Scenes’ camera following the action, so after watching the main feature below, scroll down even further to see the Behind The Scenes video!