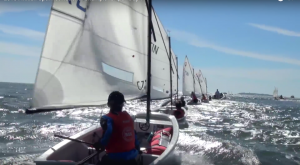 The 2015 Finnish Optimist National Championships were held at ESF. With over 100 competitors, there was plenty of action and excitement, all captured in stunning HD by Hartas Productions

In 2015, Hartas Productions travelled abroad to Europe and was contacted by Esbo Segelförening, or ESF, as they were the hosting club for the 2015 Finnish Optimist National Championships.

Having hosted many major Optimist regattas before, ESF did a fantastic job as over 100 competitors from all over Finland, Sweden, Norway and Estonia descended upon the club to compete over three days in one of the most hotly contested events in recent memory!

The weather conditions were absolutely ideal for the Optimist class, with sunshine every day and the postponement flag only flying once during the regatta as the competitors waited a short time for the wind to fill in.

So large was the fleet, and with such a range of skill level, that competitors were split into two main events; the more advanced and older children competing in the National Championships with the less experienced and younger sailors competing in the Cadet fleet. Both fleets raced in parallel, with the Cadet fleet hosted close to shore to create a stadium sailing event that kept excited parents right in the thick of the action. Further out, the larger race course and steadier winds provided competitors with the ultimate race track that pitted the skills of the sailors against each other. Affording no local advantage to influence the results, a truly competitive regatta took place with minimal fuss and protests.

Hartas Productions always loves filming junior sailing events as the racing is always super tight and with small boats, we love to get the camera right into the thick of the action and capture all the emotions and drama of young sailors having a great time in race mode!