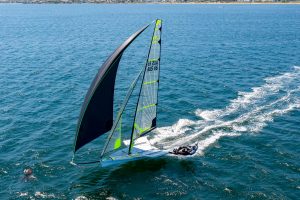 The 49er, 49erFX and 29er fleets all had their Australian National Championships in the first week of 2019 at the Royal Yacht Club of Tasmania, and it was a spectacular event.

The 49er and 49erFX fleets had runaway winners but the competition in the 29er fleet was intense, with the fight for the podium coming down to the very last race.

On the final day, all fleets got three races in, and the 49er fleet were loving the conditions as they flew around the race track at top speed. After another faultless performance today, Will and Sam Phillips became 2019 National Champions, sealing off a perfect score card of 16 bullets from a possible 16 races. James Grogan and Charlie Dixon were close behind the winners finishing in second overall, with Oliver Manton and Jack Lloyd rounding out the podium in third overall. 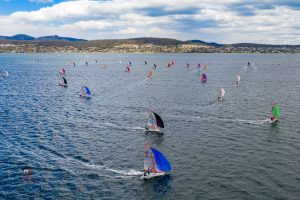 29er fleet tearing across the Derwent River in Hobart during the National Championships. Photo by Hartas Productions

Finishing a full 21 points ahead, John Cooley and Simon Murnaghan became Australian 49er FX champs today, but the battle for second and third went down to the wire with both teams tied on points. After a tough fight all regatta, Jasmin Galbraith and Chloe Fisher ended up taking out second position after Laura Harding and Laura Thompson overcooked it on a gybe in the final race, having an unplanned swim and putting them at the back of the fleet in the critical moments. Despite this, the sailors kept smiling and kept racing. 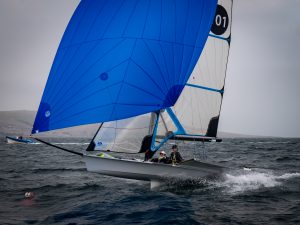 The 49erFX fleet loving the conditions. Photo by Hartas Productions

Whilst both 49er fleet winners were anticipated all through the event, the 29er podium was a complete mixup until the final race of today. With yesterdays 10th turning into a DSQ and also carrying the BFD, William Wallis and Fynn Sprott were praying for three races today to bring the second discard into play, and the pressure was still on to perform well in each of those races if they were going to come back up to knock Archie Cropley and Max Paul off the top of the leaderboard. Scoring 11th in the first race of the day put a lot of pressure on the final races, with two bullets the only option if the locals were going to take the big trophy home. But Archie and Max could taste the glory and sailed brilliantly in the final two races to become the 2019 29er National Champions. Will and Finn take home the silver and Lachy Brewer and Flynn Twomey performed well today to complete the podium.

Oscar O’Donoghue and Rupert Hamilton were fourth overall and first in the junior category, with Ethan Galbraith and Charles Zeeman 2nd junior in 8th overall. Charlie Goodfellow and Jacob McConaghy were third in the juniors, making it an all Tasmanian podium.

Special mention to Harry and Jack Joyner from WA, who in the first proper regatta managed to place 12th overall and 4th Junior.

The racing has been intense and exciting on the water and the Royal Yacht Club of Tasmania have been a fantastic host with plenty of volunteers generously giving up their time and resources to ensure a great regatta was had by all. Look forward to seeing you again soon!

Sailing does not get much better than this!!Check out the video highlights from todays racing at the Zhik 9er Australian Nationals!Video by Hartas Productions