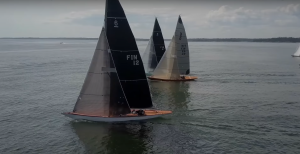 Racing from Finland, the 6 Metre “RRegatta” is a fun regatta in the middle of summer hosted by ESF.

“The International Rule, also known as the 6 Metre Rule, was created for the measuring and rating of yachts. Prior to the ratification in 1907

countries raced yachts under their own rules and any international competition was always subject to various forms of handicapping. These were often subjective and certainly open to protest.” This quote shows the importance and significance of the Rule for modern yacht racing. Alfred Benzon from Denmark initiated the idea, and in 1907 the International Yacht Racing Union (IYRU) ratified this first International Rule.

L = the length of the waterline

G = the “chain girth” from covering board, around the keel and back up.

This “First Rule” led to relatively short boats with huge sail areas. These early boats had a hull length around 5.5 to 6m with long bowsprits so that the length overall was around 9.5 m. The narrow beam, about 1.75 m, and sail areas between 50 and 60 sqm in the gaff rig caused boats that were very wet to sail, with limited seaworthiness.

But even when the new Rule was in competition with the S-Rule and the Square Metre Rule in other countries, it was a big success. By 1914, 208 Six Metre boats were built to the International Rule with fleets in Norway, Sweden, Denmark, Germany, England, Italy and France.

The 6 Metre Class was chosen for the 1908 London Olympic sailing events held in the waters off Ryde on the Isle of Wight, and the 1912 Stockholm Olympics at Nynäshamn.

The second epoch of the Metre Yachts  began after the first World War. Once again meetings were held in London, in October 1919. To encourage more seaworthy yachts the Rule was modified to the proposals made by designer John Anker.  The “B” measurement was omitted from the rule and replaced by a minimum beam, so it was no longer possible to build a really narrow boat. The difference “d” and the Girth “G” were not penalised as much as before, but the sail area was penalised more. This was one reason for the introduction of the “genoa” in 1926, because the sail area was measured from the size of the foretriangle, rather than the actual size of the headsails. These alterations to the rule led to huge changes in the 6 Metre Class. The boats became longer and heavier, with “Marconi” (or “Bermudan”) rigs with a sail area around 40 sqm. The waterline length, which was now measured at 90 mm (1.5 per cent of the 6m class rating) above the waterline, increased to 7m. The displacement went up from 3 to 4 tons.  New nations like the USA, Argentina, Uruguay and India became members of the 6 Metre community, but Scandinavia remained as the centre of racing. The Scandinavian Gold Cup was inaugurated and was the forerunner of a World Championship. Again the Sixes appeared in the 1920 Antwerp Olympic sailing event held in the waters off Ostend, in the 1924 Paris event at Le Havre, in the 1928 Amsterdam event on the Zuidersee and in 1932 at Los Angeles.

As before the designers tested the rule to its limits and once again the boats started to become less seaworthy, due to narrow beams and lack of bow buoyancy. Again the IYRU reacted and 1933 the rule was simplified and changed to the rule that is still in force today. The “G” measurement was removed,  which allowed designers to make the keel deeper with the ballast lower. That makes the boats more stable and seaworthy. Together with the change of the girth height at the bow, the boats became more buoyant forward. The Sixes were chosen for the 1936 Berlin Olympic games at Kiel, for the 1948 London Olympics at Torbay and for the last time 1952 in Helsinki in the waters off Harmaja.

The next big step for the class was in the years 1975 and later, when a number of new boats were built. The boats of this time started to look very different. The rudder was separated and no longer hung on the back of the keel, becaming more effective. The shape of the sterns and the bow style changed, but the biggest improvement was the keel. The legendary win of Australia’s 12 Metre at the America’s Cup showed the potential of the new “Wing Keels”. The 6 Metre class became one of the most innovative development classes at this time. In 1973 the World Cup was presented as the trophy for the World Championships.