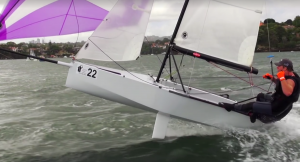 Cherub Nationals had some amazing sailing! Hartas Productions was there to film it!

The Cherub Nationals is the highlight event of the calendar for many Australian sailors, and Hartas Productions was the official video provider! The Cherub is one of the most exciting classes of sailing boat in the world! Originally an International class, with World Championships held every year, the class split in two not so long ago, with the Australian Cherub staying closer to its roots and the UK Cherubs morphing and evolving further.


It is the Australian Cherub that has become one of the most popular skiff-type boats in the country, experiencing a massive resurgence in recent years. The recipe is simple: short waterline of 12 feet, super stiff, super light construction from carbon fibre, and a large sail area. Australian Cherubs have been recorded at speeds close to 30 knots, faster than almost anything else on the water!

With the crew on trapeze and the skipper steering from the deck, this conventional layout is compatible with crews made up of siblings, boyfriends and girlfriends, husbands and wives, parents and children, and everything in between! Sailors of all ages fill the fleet and it makes for some great racing in these speed machines.

Hartas Productions was the official video provider for the 54th Cherub Nationals which was held from Drummoyne Sailing Club over 2016-2017. The host club put on an excellent event, with exciting racing every day in all conditions testing the sailors at every turn! There were some spectacular capsizes, awesome spinnaker rides and intense, tactical upwind battles.

Cherub Nationals are always loads of fun and we aimed to capture and portray all aspects of the event, with a healthy balance of on water racing, and on shore shenanigans! Hartas Productions was proud to support this class and provide content which was shared all around the world, gaining huge exposure for the class which did not go unnoticed.
Hartas Productions produced three videos for the 54th Cherub Nationals and you can see them all below: