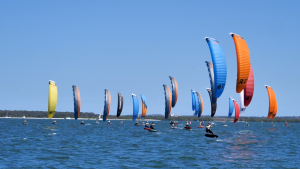 The men’s division was pretty much sewn up by the start of the event with Nico Parlier, who has dominated this tour for the last two years, having won the previous two events in Mauritius and Germany, and 16 year-old American rider Dani Moroz had cut a swathe through the women’s division at the penultimate event in October and was now a shoe-in for the women’s title.

The event kicked off with solid winds on day one which then settled down to a perfect 10-15 knot breeze, ideal racing conditions, for the rest of the four day regatta and the scene was set for a dream end to the tour.

Parlier got off to a flying start, winning all but one race in which Olly Bridge managed to take a bullet to deny Nico a clean sweep on day one. This was to be the form for the following days and, while Nico would go on to win 19 of the event’s 24 races, Olly was usually the one nipping at his heals with Riley Gibbs consistently coming in third and also scoring a bullet himself. 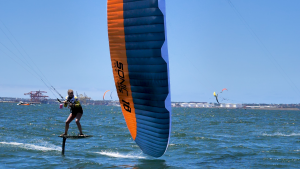 Plenty of action in the 2017 Hydrofoil Pro Tour! See it all in the videos by Hartas Productions

Dani had a flyer, winning the women’s division by 443 points at the final event, to round out an epic year for her which culminates in her second Hydrofoil Pro Tour title in as many years. Dani’s still at high school and juggles her training and competition schedule with studying and swim training so wasn’t able to make every event on this year’s tour but it’s going to be exciting to see the progress she makes when she’s able to focus on racing full time. At just 16 years-old she’s got a bright future ahead of her!

Hartas Productions was on hand to produce the daily highlights video coverage for this event! It was the first regatta where Hartas Productions could use their new camera system which produced some incredible images! Check it out in the videos below!