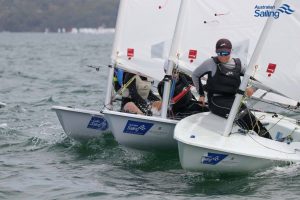 One of Australia’s biggest junior sailing state competitions was contested in October when the NSW Youth Championships descended upon the gorgeous Lake Macquarie on the NSW Central Coast.

Hopefuls from across the state, as well as entrants from Queensland, Victoria, Tasmania and South Australia – and even one from New Zealand – competed in the last of the nation’s state-based youth regattas for the year.

The event, hosted by South Lake Macquarie Amateur Sailing Club, which featured nearly 400 youngsters in 288 entries across 20 Classes, including Australian Sailing Team youth representatives, windsurfers Hailey Lea of Queensland and Alex Halank from NSW. These impressive figures are a 20% increase on the previous years regatta.

A surprise appearance by Olympic Gold medalist Tom Burton at the NSW Youth Championships was the icing on the cake of a successful trio of state-based junior events to round out Australian Sailing’s youth regattas for 2017.

Burton, who won the Laser Class in Rio last year, began his career at South Lake Macquarie Sailing Club, which hosted the NSW title for the first time.

Sailing coach and legend Richard Scarr was super impressed with the event, saying it was:

“The best NSW youths we have ever come to. Well worth the trip from Hobart. Great sailing and perfect conditions, great venue, easy accommodation options, amazing organization and fantastic media . The volunteers were fantastic! Such good participation numbers for our sport! Thank you from the Tasmanian State Sailing Performance Program.”

Australian Sailing’s NSW and ACT Regional Manager Declan Brennan said the sailors were thankful to the more than 100 volunteers who helped the event run smoothly.

“We had some amazing statistics coming out, such as the fact we were able to launch a boat every 28 seconds when we were in peak flow, which is a phenomenal outcome,” he said.

It meant we could get the sailors out on the water really quickly. We had also some wonderful rigging areas for them, plenty of space to spread out.”

Hartas Productions was thrilled to be the official video provider for Australian Sailing at this event. Make sure to check out the videos below: