18ft skiffs flying downwind under the watchful eye of the Hartas Productions drone!

The 18ft skiff class has always been one of the most dramatic classes in sailing. And what happens when you have a fleet of them racing on the famous Lake Garda, Italy?

YOU GET SPECTACULAR SAILING!!!

Hartas Productions was on scene to cover a few days of the 18ft Skiff Europeans and Mark Foy Trophy and the racing was amazing! A number of teams from Australia shipped their boats over especially to compete in this event, whilst a number of more local, European entrants fought fiercely for the title of European Champion.

A few teams from the United Kingdom looked strong and poised to make a determined effort but as ever in the 18ft skiff class, one small mishap can cost you hundreds of meters, and put you at the back of the fleet in a matter of seconds. 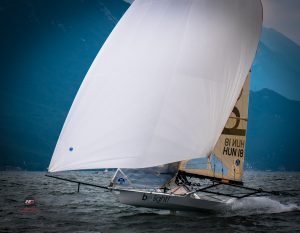 The Hungarian BeLight team were raring to go and must be commended on making bold decisions regarding rigs, opting to go for the big rig which, although rarely the right decision in the reliably windy Lake Garda, turned out to be a rare stroke of genius as the famous Ora wind from the south failed ot develop one day, leaving the majority of the fleet to struggle with their smaller rigs in the lighter breeze whilst the Hungarians powered away to a race win.

Denmark has shown the biggest growth recently, with their fleet increasing from one to five skiffs in the last 12 months! In fact it was one of these teams that has just been crowned the European Champion and the whole European contingent are looking forward to the next Grand Prix event to be held in Sonderburg where all the Danish teams are expected to be on the water.

Hartas Productions was on site for three days to capture these amazing boats sailing on the lake and have published a number of still images that can be found by clicking this link here.

In addition, a highly successful sailing video has been published by our talented team, showcasing just how awesome these boats truly are. Watch it below!