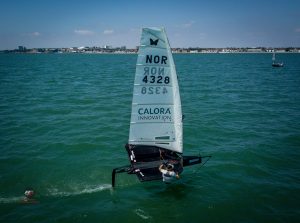 In 2018, Hartas Productions began making a new kind of video content. We teamed up with Norwegian pro sailor Alexander Ringstad to follow his adventures in the 2018 UK Moth nationals, the 2018 Moth European Championships and, later, the 2018 Martinique Flying Regatta! 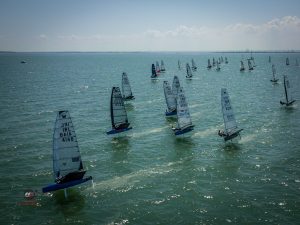 The 2018 UK Moth Nationals had a super competitive fleet! Photo by Hartas Productions

Our joint adventure began at the 2018 UK Moth National Championships at Thorpe Bay, where light winds, big tides and lots of seaweed made for a difficult regatta for Alex. After a slow start to the regatta, he started to show some form in the middle of the championship, but these good results were unfortunately punctuated by a few three-letter results, which meant his overall position dropped back to 22nd out of 42 competitors.

Despite this, during the event, Alex and Ollie spent plenty of time working on improving his boat, making little tweaks and changes here and there to improve the overall performance of the boat. New vang/kicker ropes, new systems and some slick splicing meant that by the end of the regatta, the boat was in pretty good shape.

After the final race, the boys de-rigged the boat, put it on the roof, packed up and were on the road within an hour! The GPS said over 14 hours to their destination: Borstahusens, Sweden for the 2018 Moth European Championships! And so began the lengthy roadtrip!

Plenty of adventure as the boys barrelled across Europe up to Sweden, driving across the famous Øresund Bridge from Denmark to Sweden, with Ollie flying alongside to get the spectacular view! 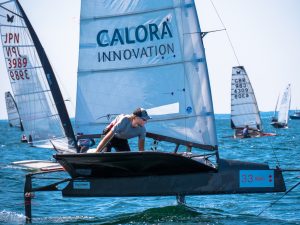 A perfect foiling tack is not an easy feat for even the best Moth sailors, and Alex makes it look so easy at the 2018 Moth European Championships in Sweden – Photo by Hartas Productions

At the European Championships, there were more challenges to contend with; in addition to a problem with seaweed again, there was a few hundred meters of knee deep water between the shore and where the water was deep enough to put the boats down, meaning all the sailors were exhausted from carrying their boats to the water before they even went sailing!

Another challenge that Alex had to overcome was his bad luck when it came to the race course! In all the effort of planning and travelling to the event, Alex had not had time to properly read the sailing instructions, which meant a few DNF results as he sailed the course incorrectly. This was a big shame because his performance on the water was excellent, even getting to the top mark in the top 10 a few times!

Once Alex had fixed these issues, the choppy water of the first few days calmed down a bit, making the conditions on the water absolutely ideal, allowing him to pick up some great results to get back into the championship!

Unluckily, there were also some bad luck moments, including a huge pitchpole/nosedive capsize, where Alex’s feet didn’t come out of the foot straps, pinning his feet to the boat. This meant that during the crash, he slammed forwards with his legs wrapping around the sidestay and slamming his body against the boat. Captured perfectly in video by Hartas Productions from the drone, we can clearly see that this crash injures Alex, which affects the remainder of his regatta.

Despite the bad luck and injured legs and ribs, Alex kept chipping away and ended up finishing the regatta as the 2018 European Moth Youth Champion! A massive effort and huge achievement!

This was the end of Season 1 of the Vlog, and you can watch all the episodes below. Make sure to check out Season 2, where the boys head to the Caribbean and get even more adventure than they anticipated!

Alexander Ringstad teams up with Ollie from Hartas Productions to show you inside the life of a Norwegian Pro sailor! Follow the adventure and share with your friends!Video by Hartas ProductionsCalora Innovation Racing Team