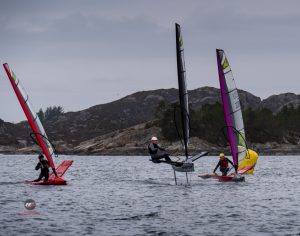 The 2018 WASZP Cup Norway had its first Stage in early May held at Glesvær, just outside Bergen and it was a sensational event, with 14 boats turning up to take part in the epic racing!

Conditions were ideal all weekend. The first race was held in a light 8-10 knot breeze which gave some of the newer sailors an gentle introduction into foiling. After a lunch break onshore, the wind came in hard, reaching 24 knots which resulted in some spectacular sailing and even better capsizes! The format of racing close to shore meant that spectators could watch the the sailors compete around the track as the proximity to the shore made the wind shifty and puffy, making the racing even more thrilling.

Day 2 of WASZP Cup Norway saw a perfect 15 knot breeze flowing into Glesvær again and the fleet headed out for another fleet race where it was clear that the sailors were learning fast, as the starting line was the scene for a dramatic display of daring and tactics with a number of boats opting for the pin end, port tack start, converging with the starboard tack, boat end fleet within seconds. Avoiding collisions and rule infringements, the fleet continued to race tightly all around the race course before taking a break and sharing the course with the windsurfing fleet who conducted a few races whilst the WASZP’s had their lunch break on the water.

Once the windsurfers returned to shore, the WASZP’s began the much anticipated slalom racing event. This format of racing was truly amazing to watch as four boats in each flight flew onto the race track on a direct reach after a three minute start sequence. Sailing perpendicular to the wind angle, the WASZP’s sped toward their first mark at top speed with some epic close racing and tussles.

The boats then had to complete four gybes in quick succession to successfully round the four marks that were laid directly in line with the wind, a mere 50 meters separating them. This created some spectacular racing as the tactics and decisions were crucial and changed at lightning speed. If a boat failed to pull off a foiling gybe, they often gybed immediately back and focused on getting the boat foiling again on Leg 3 as opposed to spending time trying to foil on Leg 2. If a boat took too long setting up for a gybe, they would find themselves too far downwind and had to sail back upwind to get around the mark.

It was truly the most spectacular display of sailing, racing and tactics and had spectators on shore cheering and yelling with abandon! The lead changed constantly and boats that were in last place often came back and overtook their fellow competitors to a podium finish! The slalom racing was magnificent to watch and is fast becoming a staple of the WASZP class around the world.

Stage 2 of WASZP Cup Norway will be held in Åsgårdstrand in early June. Stay tuned!

At the start of the 2018 WASZP Cup Norway, everyone is making sure their boat is as fast as possible!Video by Hartas Productions