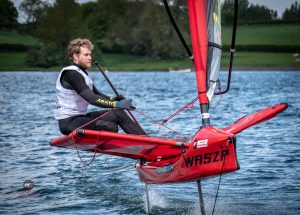 The 2018 WASZP UK Nationals were the first WASZP National Championships held in the UK and it was an absolute success! Hosted by Rutland Sailing Club, the fleet began arriving on Thursday for some practice windward/leeward races and to have a go at the hugely popular slalom style racing that other WASZP fleets around the world have championed.

Race Officer Mike Haynes used these practice races to collect valuable data about the WASZP fleets abilities and characteristics. From this data, he worked out the optimal course shape, length and number of laps but then took it a step further. Mike went above an beyond and was insistent on consulting the sailors each morning as they enjoyed a cup of tea and each afternoon as they enjoyed a few crisp cold beverages to ensure that all competitors were happy and to seek suggestions for possible improvements and what the attitude of the fleet was toward the schedule of racing the following day.

A sunny day for the first day of championship racing was filled with a patchy and puffy breeze that topped out at around 18 knots in the gusts. The first three races saw the fleet fairly scattered but after a break on shore for lunch, the following two races showed that everyone had made massive improvements over the course of a few hours.

There was a collision in Race 4 between Duncan Hepplewhite, the UK WASZP Dealer from SailingFast.co.uk and Philip Ewart from Derwent Reservoir Sailing Club. Both sailors and boats got away lightly and as soon as they both got back ashore, they had a beer with each other, shook each others hand and had a good laugh about it. The collision was caught on camera by Hartas Productions and can be seen by following this link. 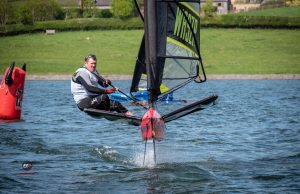 Day two featured a standard British summers day with grim rain and no more than 2 knots of wind. In alignment with Race Officer Rick’s management style, the fleet were consulted and a general consensus resulted in all racing postponed for the day by 10:30am. Such is the casual, relaxed and friendly atmosphere of the WASZP class!

The final day of racing was sunny but with light winds. This didn’t stop the WASZP class from completing four races in low-riding conditions and there were no complaints! The competition was still fierce and the best sailors still came out on top.

In the end, Graham Priestly took out the title and Rachael Jenkins was the first female and they both took home some of the most gorgeous trophies ever seen, meticulously crafted by the talented Mark Covell and Reedway Precision.

The 2018 WASZP UK Nationals showed just how truly versatile the boat is, how much fun they are to sail and how much camaraderie there is amongst the sailors. All the competitors were sharing a drink at the end of the day, planning the next great WASZP events in their home clubs, swapping tips and tricks and demonstrating the true strength of the WASZP Class; community spirit.

To get involved in WASZP sailing or to just have a go and see if it is right for you, contact your local dealer or head to the WASZP Homepage here.

WASZP UK Nationals are on at Rutland Sailing Club! Check out the video preview here!Video by Hartas Productions 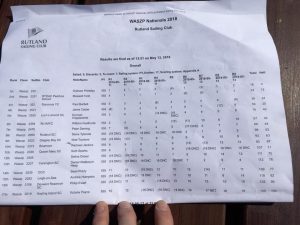