The Flying11 – The Best Youth Sailing Boat in the World! – VIDEO 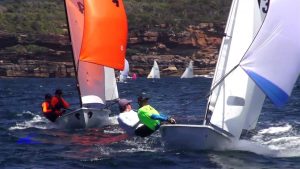 The Flying11 – The Best Youth Sailing Boat in the World!

The Flying11 – The Best Youth Sailing Boat in the World!

The Flying Eleven, or Flying11,  is an exciting, high performance, light weight racing dinghy, competitively sailed by 2 people of a preferable combined crew weight between 75 and 115kgs.

Ages generally range from 10 to 18yrs but there is no restriction to parental or senior participation.

Designed in Australia for Aussie conditions, the F11 is a one design class with strictly enforced hull, sail and rig measurements.

Currently raced in NSW, Tasmania and Western Australia, they are also sailed in Victoria, Queensland and there are a few boats in New Zealand.

It is an excellent follow-on boat for Sabots, Manly Juniors and many other junior classes. The class is very strong around Australia, and is an outstanding class of boat for developing 3 sail handling by young sailors rising from single sail and the more junior classes.

Due to the commitment of the Association, its’ constitution and state and club coaching programmes, new arrivals step up to highly competitive sailing quickly and champions are constantly being fed to world and other nationally known classes – 29ers, 13ft skiffs, Cherubs, 12ft skiffs, 16ft skiffs, 18ft skiffs, 420s, 470s, Moths, 49ers and other international classes. High performance sailing is fast becoming the goal of a great many dinghy sailors with the appearance of 49ers as an Olympic class. The Flying Eleven is a logical step in the transition between these and the junior classes.

The F11 National Regattas regularly attract fleets of 90 to 100 boats, State Regattas attracting around 70 to 90 boats split over 2 weekends in December and February each year.

National Championships are held outside NSW every 3rd year and the number of interstate boats is growing steadily.

Since 2000, Melbourne, Brisbane, Sydney Harbour and Lake Macquarie have hosted the National Championships for Flying Elevens, with Tasmania eagerly setting up in the foreseeable future to host the Nationals when the cycle arrives outside NSW.