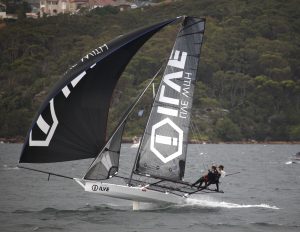 The ILVE 18ft Skiff is a racing machine! Based in Sydney and racing from the Australian 18 Footers League in Double Bay, the team has been slowly climbing the ranks and improving their results. By March 2016, they had finished their most successful season to date, securing multiple trophy wins and even more podium finishes.

It has been confirmed that the major sponsor of the skiff, ILVE Appliances, has begun going through the motions of confirming the build of a brand new boat for the team, with the aim of boosting the teams performance, supporting the sport and passion of the team, and providing the company with a point of pride in contributing to the community and sport of sailing.

Whilst details for the new boat are yet to be revealed, it is certain to be built to the highest standards, and rumours are circulating that the visual design of the boat will be radical and show-stopping to look at! It can be confirmed that the team is in discussion with Swan Signs, one of Australia’s newest and most progressive marine signage companies, so it is looking likely that the boat will be easy to spot and will stand out in a crowd!

Hartas Productions has been a long time sponsor of the ILVE 18ft Skiff, providing social media and video coverage to boost the team aesthetic and profile, as well as providing some sponsorship dollars to help the team keep their boat in top condition.

On a cold day in winter, the ILVE 18ft Skiff team went out for a sail and found that they had the iconic Sydney Harbour all to themselves. Combined with a perfect, if brisk, 15 knot South Westerly breeze and nothing but blue skies and sunshine, the team put on brilliant display of speed and poise for the cameras. Click here to like the team on Facebook and check out the video below: