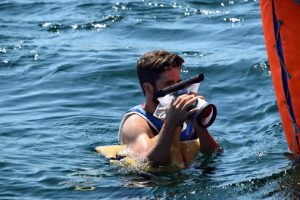 The Melges24 Australian Championships of 2016 was an event that challenged sailors and media providers alike! Hosted by Lake Macquarie Yacht Club, sailing on the lake meant that as the wind rose, the sea state became very choppy. Races were held in light winds and strong winds and everything in between!

The Melges24 class is a truly spectacular class. Very few other boats can offer the same level of competitive racing on such a fun, exhilarating platform. In light winds, the boats behave like yachts but in stronger breeze, they fly like skiffs! Short waterline length, tall mast with mast head spinnaker and very light hulls make a great combination.

Thirteen boats from around the country made their way up to the beautiful Lake Macquarie, just north of Sydney, New South Wales to compete in the four day event. The racing was tight across the whole fleet, with every position being fought for until the final race. In the end, it was the rockstar team of Cavallino with the unbeatable combination of Chris Links on the helm with tactics being called by ex-Olympian Nathan Wilmot that won the event from Roger That steered by Cameron Miles with third place going to Robin Deussen on Red Mist.

Hartas Productions had a great time filming this event and even jumped into the water to get some shots near the top mark! As dramatic as the shots were, Film Director Ollie Hartas did not stay in the water for long as the people who know Lake Macquarie will tell you that there are plenty of sharks that live in the lake and it would probably be wise not to tempt them too much!

Our coverage of this event was fairly extensive with daily filming, daily videos as well as social media updates both on and off the water! Check out the videos below!