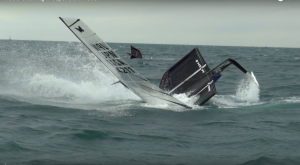 Filmed at the 2015 Moth World Championships, Hartas Productions compiled all the best capsizes to create an awesome video of Moths Crashing in Super Slow Motion!

Everybody loves watching foiling Moths crashing! There is no more spectacular way to stop your boat than a high-speed capsize. Hartas Productions was filming at the 2015 McDougall + McConaghy International Moth Australian/World Championships and the variable weather conditions, intense racing and hot blood running through some of the world’s best sailors was a recipe for jaw-dropping action.

When things go wrong in the Moth class, they go wrong very quickly and in a very dramatic fashion. Even some of the world’s best sailors can’t keep the boat from crashing wildly from time to time! At the 2015 Moth Worlds, the best sailors from the America’s Cup, Olympics and many other World Champions from various classes all descended on Australian shores to battle it out in every kind of weather imaginable. The results were truly spectacular and Hartas Productions was there filming and published daily videos! Check them out here.

Especially for your viewing pleasure, Hartas Productions compiled all the best videos of Moths crashing into one awesome video! Set to an epic track from the soundtrack of Requiem for a Dream, there is only one thing that could make this video better; SLOW MOTION! When the boats are travelling close to 30 knots, watching Moths crashing can be a little overwhelming because it is all over so quickly. Only in this video are these spectacular capsizes shown in super slow motion, so you get to experience all the action up close in crisp HD.