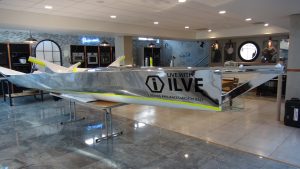 Wrapping an 18ft Skiff in Chrome Vinyl makes this the coolest boat in the world! Photo: Hartas Productions

The 18ft Skiff class is already one of the most attention grabbing boats in the world. With its low, sleek hull, intimidating wing span and fixed bowsprit, all underneath one of the largest relative sail plans in the world and “controlled” but three guys hanging off the side, almost every sailor can tell you a story of the first time they ever saw an 18ft skiff.

However, there is now a slight change. Sailors will no longer be swapping stories about the first time they ever saw an 18ft skiff, they will be all talking about the same boat.

The ILVE 18ft Skiff Team took delivery of their brand new skiff in September 2016, built by Brett and his team at Van Munster Boats. The boat builders had done a sterling job, the boat looked great! But it wasn’t quite ‘sterling’ enough…

When the folks at ILVE sat down with skipper Oliver Hartas last season to discuss the new boat, the sponsor had one main objective; IMPACT. Recently, many of the 18ft skiffs forsaking the radical visual designs that made previous skiffs so memorable in favour of the cheaper, simpler alternative of a plain paint job, usually white, with the logo on the bow. Although the sponsorship of a skiff is still one of the most valuable marketing tools currently available, ILVE wanted to make sure that their skiff stood out from the fleet. They wanted to be noticed. They wanted to have an 18ft skiff that everyone would be talking about!

So with that daunting brief, Oliver called up long time friend and colleague, Marc Ablett. As well as running his leading marine signage business, Swan Signs, Marc is also the director at Down Under Sail, Australia’s newest marine media outlet. After a few discussions with all parties, the design was confirmed and work started! 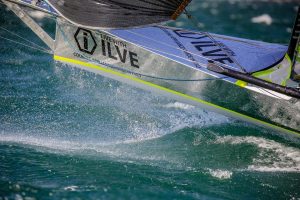 The technical properties of the vinyl used means that a super smooth racing finish is applied with almost zero weight penalty, and it makes an 18ft skiff look amazing! Photo: Michael Chittenden

The boat was wrapped in the latest and greatest vinyl. A super conformable material with specialised air-release technology. The surface of the vinyl also provides the ultimate racing surface as the boat cuts through the water. With the all the advancements in the plastics industry, this wrap is one of the lightest racing surfaces available.

As the vinyl went down onto the boat, Hartas Productions was there to film it! Check out the video below of how an 18ft skiff became the coolest looking boat in the world: